After reviewing more than 450 entries from over 40 countries, judges, communications experts from global public health organizations and online voters have selected the winners of the 2020 STOP Global Media Competition.

The winners created posters, infographics and short videos to creatively convey the urgency and importance of the competition’s theme, “Expose Tobacco Industry Manipulation, Save the Next Generation.” As the industry continues to target youth, tobacco companies should take note: This next generation is calling them out.

“We received an overwhelming response to this competition. More than 127,000 people reacted, commented and shared the posts on Facebook, and we reached an estimated 500,000 people on GGTC’s social media pages. The entries tell us that the tobacco industry’s targeting and manipulation of youth persists even during the COVID-19 pandemic, through cigarettes and new electronic products. They put a spotlight on the urgent need for action: Governments must act to stop the industry’s underhanded tactics, or the next generation will suffer the consequences,” said Ms. Bungon Ritthiphakdee, executive director of the Global Center for Good Governance in Tobacco Control (GGTC), a partner in STOP, which organized the competition.

Winners were selected based on a combination of judges’ scoring and online votes. Special prize winners were determined by GGTC’s country partners.

Title: SMOKUFF
This entry by Shashank Timilsina, a 21-year-old student at the Asian Medical Students’ Association in Nepal, represents the manipulation the tobacco industry uses to shackle a person into addiction. Shashank views manipulation as a crime against persons, families and societies. Title: Tobacco Addiction Debunked
This entry by Shashank Timilsina, a 21-year-old student at the Asian Medical Students’ Association in Nepal, shows that the tobacco industry values profits more than the lives of millions of people who die every year due to tobacco, and that it goes to great lengths to make tobacco more addictive and, hence, more profitable. Title: Catching the Wrong Fish
This entry by Edrian Negrete Divinaflor, a 20-year-old student at the University of the Philippines, shows the numbers that prove cigarettes are the highest contributor of trash in the ocean. The poster also implies that the tobacco industry should never be seen as a development sector ally. 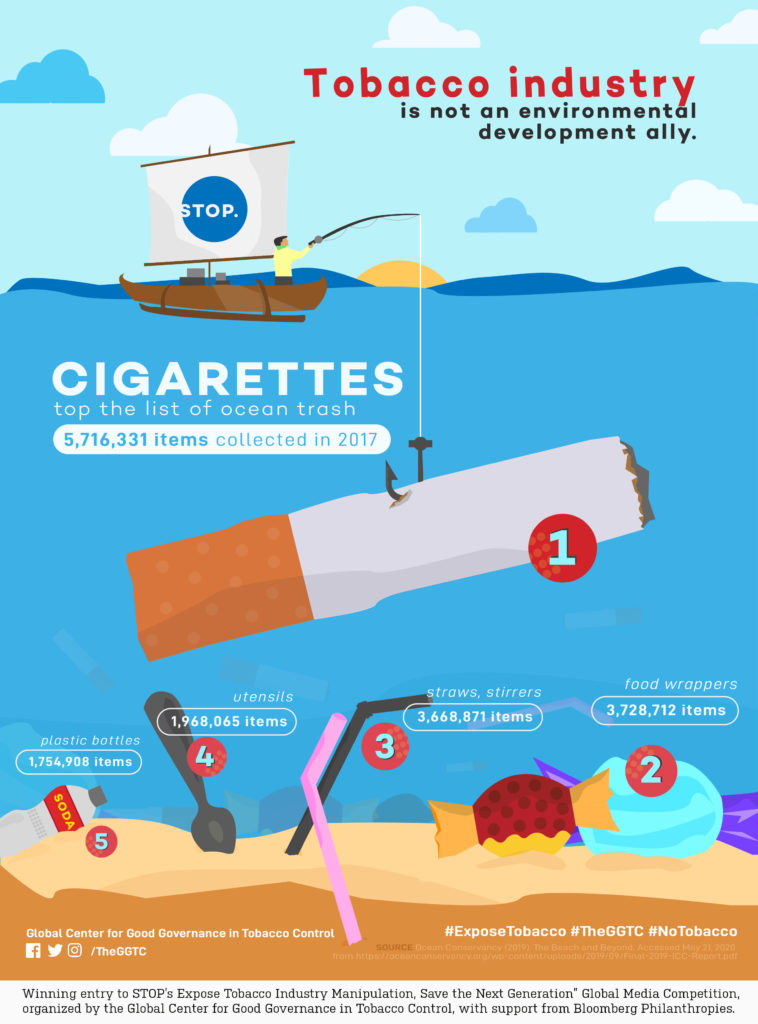 Title: What You Didn’t Know & Eva
This entry by El Salvador’s Fondo Solidario para la Salud (FOSALUD), as represented by its project manager Ana Aviles, presents the tobacco industry’s use of social media influencers, celebrities and colorful packaging of tobacco products to attract youth into smoking.

Title: Laxmi’s Story: Save our Children, Stop the Manipulation
This entry by Prarthana Subedi, a 21-year-old medical student in Nepal, illustrates the psychological impacts of tobacco industry advertisements on children. She grew up in a village where children are exposed to tobacco advertisements in candy shops and thrift stores and are influenced by elderly people who, as part of their culture, started smoking bidi and hookah at a young age. Prarthana aims to condemn tobacco and the tobacco industry and urge children to value their health, life and dreams.

Title: #StupidLittleStick
This entry by Julio Adam Pratama, a 22-year-old entrepreneur in Indonesia, features a song he wrote based on his personal story. Growing up, he felt anger toward his father for becoming addicted to tobacco products. He then realized that the real culprit is the tobacco industry, as it continues to produce products that will hook and kill people. As a way to express his frustration and anger toward the tobacco industry, he wrote this song to call on the industry to stop the manipulation because he doesn’t want his generation to be the next target.

Title: Child Exploitation in the Tobacco Industry
This entry by Bendy Lemon Salameh, a 20-year-old medical student from Lebanon, uncovers the fact that the industry forces underage children to work long hours under the scorching sun, with many of them ending up intoxicated by nicotine or suffering from heat stroke. Aside from exposing this truth, the video also calls on the audience to boycott the tobacco industry.

Title: Turn Your Back on Tobacco Now
This entry by Jaz Alcyone Soriano, a 24-year-old video editor from the Philippines, shows the irony between the large body of evidence showing tobacco products’ negative health effects and the tobacco industry’s continuous operations and development of new addictive products, such as e-cigarettes, to hook youth. She believes that the industry blatantly disregards people’s lives. While there is still a long way to go in shutting down the tobacco industry and holding them accountable, exposing the industry for what they really are—money-hungry and manipulative exploiters—and by influencing the youth to turn their back on tobacco, the movement will eventually succeed.

Title: There’s No Time Better than Today to Stop Smoking
This entry by Katherine Hui, a 19-year-old student from Rice University in the United States of America, conveys the importance of quitting smoking and exposing tobacco industry tactics during these unprecedented moments in the time of COVID-19. It is a time that presents a “teachable moment” and an opportunity to encourage the world’s smokers to quit smoking outright.

Title: 7 Ugly Facts About the Tobacco Industry
This entry by Shashank Timilsina, a 21-year-old student at the Asian Medical Students’ Association in Nepal, presents the most outrageous actions taken by the tobacco industry against humanity. Through this poster, he hopes to emphasize that the tobacco industry has caused irreparable damage. Title: Cigarette and Teenagers
This entry by Ahmad Alief Aurum, a 22-year-old student at the University of Indonesia, reveals how the tobacco industry in Indonesia uses subtle media methods to draw massive consumers. Among the prominent tools mentioned is sponsorship of sports and music events, which, as research shows, can significantly influence audience awareness of tobacco products and even develop a desire to purchase them.

Title: Peel Off the Skins of Tobacco Industry
This entry by Md. Nasir Uddin from Bangladesh shows the sustained campaigns of the tobacco industry that try to attract young people to join the death march. The poster also goes with the call to action of peeling off the skin of the tobacco industry—a call to action for everyone to reveal the truth behind the industry’s flashy offerings and protect the youth. Main text: Peel the skins off the tobacco companies.

Title: The Hidden Reality
This entry by Nikita Yogesh Gupta, a 22-year-old medical student from India, tries to unmask the tobacco industry’s hypocrisy by showing the misleading information and pretentious claims on Big Tobacco’s websites versus their real actions.

Title: Tobacco Advertisements and Promotions Trap Indonesian Children
This entry by Fathi Muhamad Rahmadi, a 24-year-old from Indonesia, gives a glimpse into how the tobacco industry advertises to children in school and through other means like television, billboards, posters and the internet. Title: Smokers in Mexico
This entry by Abigail Viviana Ortega, a 31-year-old graphic designer from Mexico, serves as an expression of her dismay over the alarming rate of smoking and the intensifying efforts of the tobacco industry to grow its consumer base through deceptive strategies toward children and the youth. Title: Big Tobacco
This entry by Adnan Azeem, a 36-year-old graphic designer from Pakistan implies that behind the deaths of 8 million people every year is Big Tobacco, through its continuous marketing of deadly and addictive products. Title: E-cigs and Tobacco: 5 Facts You Should Know
This entry by Francis Thaddeus S. Lazaro, a 25-year-old student and communications specialist from the Philippines, warns youth about the health effects of tobacco products and reveals the tobacco industry as the culprit that lures a new generation into a lifetime of harm and addiction.

Title: You Are No Longer Human, You Are Monetary Profit
This entry by Skrypnik Daria, an 18-year-old student from Ukraine, is a clear representation of the tobacco industry’s view of its victims. Above each person are numbers—a portrayal of how much each person’s life is worth to tobacco companies. These price tags are designed as a social media “like” because many, especially adolescents, are tempted to give in to pressure for peer recognition online. Title: Don’t Be Fooled
This entry by Thuy Thi Thu Hoang, a 28-year-old health care worker at the Vietnam Public Health Association, depicts the duplicity of the tobacco industry. What Is the Tobacco Industry?